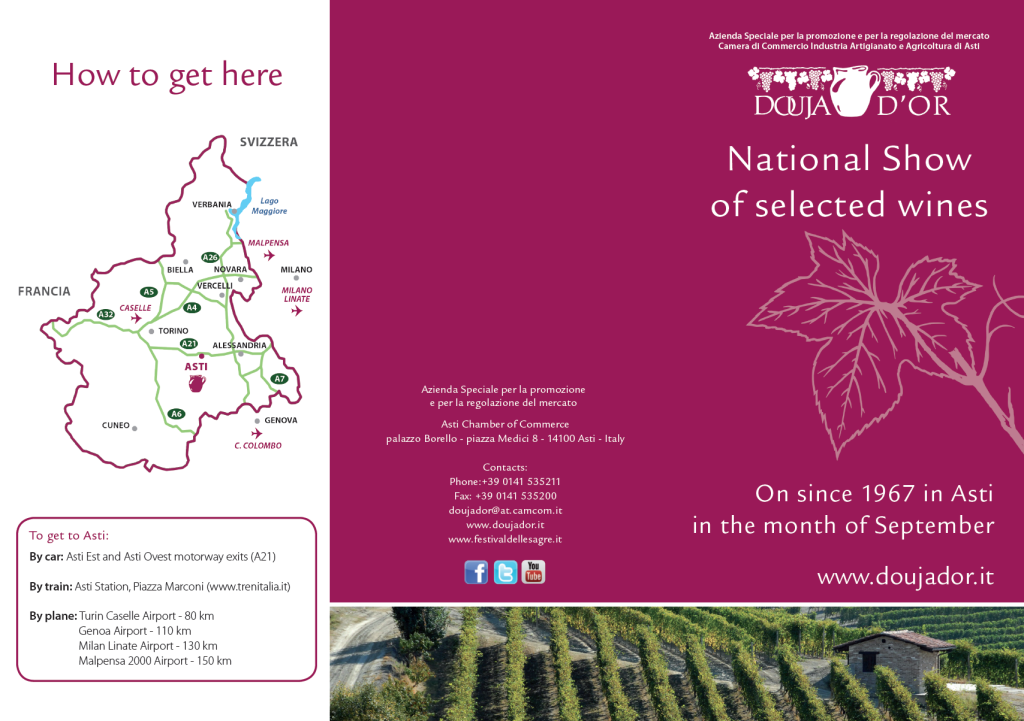 Since 1973, every year the Asti Chamber of Commerce has organised the “Douja d’Or” Prize, a national wine competition open to DOC and DOCG wines from all over Italy. The event is staged by the Azienda Speciale of Asti Chamber of Commerce under the Ministry for Agricultural, Food Industry and Forestry Policies, with the technical collaboration of the ONAV, the national organisation of wine tasters. The call for entries is published in the month of January and the award ceremony is held in September during the Douja d’Or festival. In a number of sessions experts and tasters from the ONAV examine the samples, which are presented anonymously. In the sensory analysis the sight, nose and taste of each wine is carefully assessed. The classification is awarded to wines that score at least 85 points out of 100. Samples which score over 90/100 enter the top classification of the Douja d’Or. All of the wines selected are entitled to display the “Premio Douja d’Or” label approved by the Ministry for Agricultural, Food Industry and Forestry Policies.

In Piedmontese dialect the “douja” (pronounced dooya) was an ancient terracotta jug used to decant, store and serve wine. In Asti the “Douja d’Or”, or “golden jug” is the symbol of the wine festival. Launched by the Asti Chamber of Commerce in 1967, the event has grown year by year, becoming one of Italy’s most prestigious wine fairs. In September, in a ten-day period covering the second and third weekends of the month, hundreds of DOC and DOCG wines selected by the experts from the ONAV in the national “Douja d’Or” competition are presented to be tasted and sold. The stars of the show are the wines that are the ambassadors for the Asti area throughout the world: Asti Spumante and Moscato, Barbera and Alta Langa Metodo Classico. Visitors have the chance to experience the very best of these wines made by the best local producers. Food and wine come together as top chefs present a “signature dish” each evening, and the fair offers a wide array of Piedmont’s outstanding gourmet specialities. The initiative also features a packed programme of cultural events inspired by the world of wine – art, music, theatre and literature – with guests of national standing.

This unique event held on the second Sunday of September every year, celebrates the customs and traditions of country life. Three thousand people take part in the procession in costume, with vintage farm equipment and tractors lining the streets of the town, recreating country life in the 19th century and early 20th century. Each village association re-enacts the work in the fields, the local trades, the country celebrations and religious rituals, from the harvesting the grapes to threshing the grain, from christenings to coming of age celebrations to weddings. The procession finishes up in piazza Campo del Palio, where Italy’s largest open air restaurant is set up, offering all the flavours and aromas of the most authentic Piedmontese cuisine. A small army of cooks working in situ produce more than 80 different specialities, from starters to sweets, faithfully following the traditional recipes handed down from generation to generation. Each year the event also features dishes prepared by two village associations from further afield. With its ranks of wooden chalets forming a village in the centre of the city, the Festival delle Sagre plays host to around 300,000 visitors from Italy and abroad. Facilities for disabled visitors.